skip to main | skip to sidebar

Gaupo will be performing on Thursday 13th February at The Rhythm Factory, Whitechapel. London
Doors 7.30pm
More info to follow

History of the Visitation Reviews


More loveliness for History of the Visitation.

LABEL
Utech Records
utechrecords.com
CATALOG NUMBER
URLP079
FORMAT
2x10”
Poster sleeve 20”x20”
Black vinyl + download
Edition of 300
TRACKLIST
Side A
Coral Butterfly
Side B
Mirrors & Tides
Secret Kingdom of the Swift
Side C
Night Soil
Shivers & Voids
Side D
The Dream Kingdom
ART
Patti Jordan
pattijordan.com
DESIGN
Keith Utech
ARTIST PHOTO
ASW & DJS
STREET DATE
July 27, 2013
CONTACT
A 2x10” vinyl release from David J. Smith, The Stargazer’s Assistant, incorporating 2008’s acclaimed Shivers and Voids EP on Utech Records and a new three-track EP, Mirrors and Tides, featuring “Coral Butterfly”, “Mirrors & Tides” and “Secret Kingdom of the Swift.”
Eyes closed, ears wide open, we are given freedom to dream the void. Sweeping, intricate, sometimes ominous yet always exuding a warmth and depth of emotion, The Stargazer’s Assistant produces pure cinema of sound.
For the new EP, David J. Smith is joined by Circle vocalist Mika Rättö’, who sings on the heart-breaking “Coral Butterfly”. David also had the honour of playing the late Finnish jazz drummer Edward Vesala’s Sound & Fury collection of unique metal percussion.
Ancient forests, vast plains, billowing clouds, rusted metal hulks, wet rock walls, lights flickering in darkness: these are the subtle visions of The Stargazer’s Assistant.
Born in Stourbridge, 27th August 1970, David J Smith studied fine art before gaining his BA at Cardiff in 1991. He moved to London in 1994 and concentrated on musical projects, including the avant rock group Guapo, which he co-founded.Smith has been playing drums and making music since 1986 and is regarded as one of the UK’s most spectacular and imaginative percussionists. As well as The Stargazer’s Assistant and Guapo, he performs with Cyclobe and the Amal Gamal Ensemble.
stargazersassistant.blogspot.com
THE STARGAZER’S ASSISTANT
MIRRORS & TIDES, SHIVERS & VOIDS 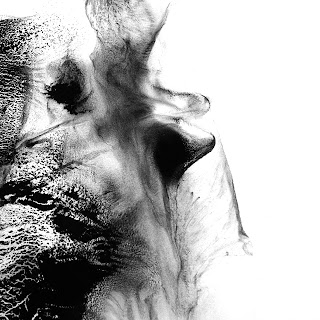 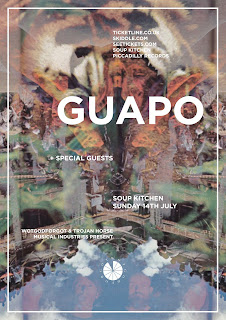 This is really happening. Get your tickets here.
http://www.musicglue.com/corsicastudios/eventdetails/25-apr-13-guapo-corsica-studios/ 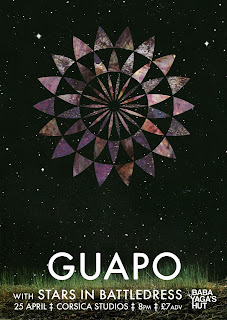 There must be a surrendering, from the very beginning, of any preconceptions about the progressive or avant-garde. Any frequenter of pop music will be entirely uncomfortable at every juncture, but that's the point. We can't apply pop necessities to music which is entirely uninhibited and seemingly uninfluenced, although that's almost certainly not the case. The very concept of a song, which we have grown to understand as a concentrated form, carries no weight in this medium. These aren't even moods or ambiences which can be deciphered through the modern understanding of music and human interaction.

A more appropriate take would be that these are swathes of creativity, unabridged and unapologetically vast. Opener, 'The Pilman Radiant', is a lumbering, prehistoric beast; meticulous and repetitive, purposely so. We get a circling of the frenetic sound, altering the prominent voice through wild guitar, bass and percussion. These are exo-sounds where the instrumentation is free from the restriction and dilution of structure, allowing ambitions to be as they are, not as they would be. There's a metronomic aspect, not just in the percussive sense, but in the way that phrases seem to serially return with sequential arpeggios that feedback against swathing underlying intensity. All seem to be cast indistinctly into an abyss which achingly forms them together into a tangible, collective sound. And that is 'The Pilman radiant'.
Their ideas have been defined as "controlled chaos" with dissonant sound somehow jarring yet almost resolving. Much of the listening experience is subconscious, and likewise, it seems that the music itself is subconsciously driven. It seems like human intervention hasn't had any bearing, as though the barriers, and transparency, of conscious thought have been at least subdued. There's a fundamental familiarity with the sound which perhaps goes beyond music as a means of entertainment and rather uses it as a tool for spiritual ceremony.
At times, and during second track, 'Complex #7', the connection to what we understand as music is indeed spurious. With electronic fizz punctuated by linear pulses as though the record were on 'Stand-by'. Yet despite the lack of reference or context there is a fundamentally affecting quality, perhaps in the timbre of the undertones. 'Tremors From The Future' echoes, as much experimental/progressive music does, the preceding decades; reinterpreting an approach. But rather than repeating, or falling to cliché, Guapo take experimentalism into an exciting sphere. The stereo sound of the headphones begins to sway while the arpeggiated theme intertwines sub-plots laden with mute scratches, creating a deep 3D collage to comprehend.
Even the concept of what an album ought to be is challenged. Time's influence seems fickle as the listener is immersed into the extra-terrestrial, multi-dimensional, the cyclic and the dissonant. Ninety-five minutes is filled (really filled) with six tracks that are typically diverse. But actually, diversity isn't that typical is it? Originality in aspect and perspective that doesn't cower under the far reaching umbrella of pop; and that's the one thing that is exclusively human: The potential of art. From a sound which seems wholly inhuman, the very fact of its existence exemplifies the possibilities. Harnessing ambiguous sound and shaping it, weaving it together beneath others, applying the human element is what makes this ultimately beautiful. It is a maximalist, seismic event; almost inconceivable. Yet it was.
Rating: 7.5/10
Share:

This page has been shared 3 times. View these Tweets.


Prepare yourself for an experience that’s simultaneously otherworldly and assaultive. On paper, the music of Guapo reads like a riddle – the British quartet’s sound is based around ideas like controlled chaos, atonal harmony, uplifting darkness, and beautiful destruction. Nothing about the band or their work seems to adhere to even the most open-minded set of preconceptions about the meaning of umbrella terms like “rock,” or “progressive,” or even “experimental.” But when you abandon the need to reconcile any of these concepts with each other, and simply let their latest album, History of the Visitation, speak for itself, everything becomes radiantly clear.
History of the Visitation is the ninth album from the forward-looking foursome. This album finds them following through on the kind of epic constructions that sprung forth from their albums like Five Suns and Black Oni.
The record is dominated by the 26-minute tour de force “The Pilman Radiant,” offset only by the 11-minute journey “Tremors from the Future” and the considerably more compact sonic sculpture known as “Complex #7.”
The band currently comprises drummer and founding member David J. Smith with mainstays Kavus Torabi (Cardiacs, Knifeworld) on guitar and James Sedwards (Nøght) on bass, joined by recent addition Emmett Elvin (Chrome Hoof, Knifeworld) on keyboards.
In addition to the new studio album, both the CD and LP versions include a live DVD of the group from their 2006 and 2007 USA and European tours. This is the only live footage of the band available to the public and features former member Daniel O'Sullivan of Ulver and Sun 0))).
Only 300 copies are available from us of the high quality vinyl pressing, which comes in a stunning gatefold jacket and which includes the DVD and a digital download card.

History of The Visitation Vinyl

You can now  order History Of The Vsitation via; guapo1.bandcamp.com 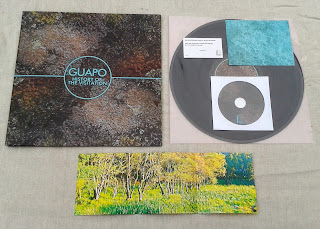 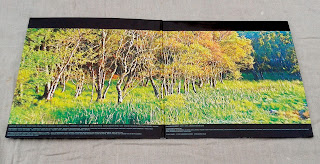 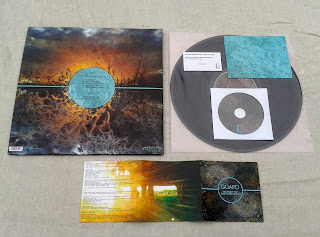 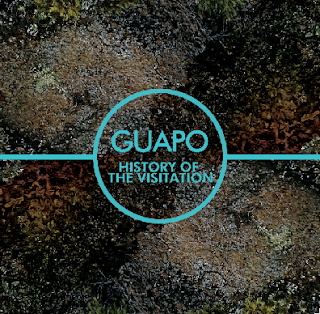 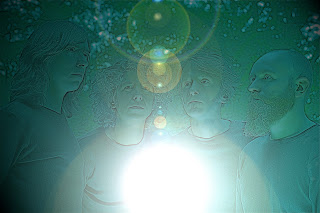 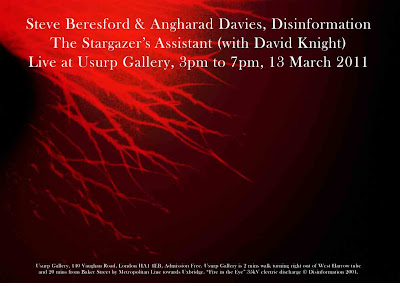 Internationally known as a free improviser on piano and electronics, Steve Beresford also composed scores for 3 feature films and numerous TV shows and commercials. Steve has worked with hundreds of musicians, including Usurp Gallery performer Najma Akhtar, and Derek Bailey, Han Bennink, Ivor Cutler, Ray Davies, Christian Marclay, Evan Parker, Adrian Sherwood, Otomo Yoshihide and John Zorn. In 2009 Steve performed "Ephemera" by Christian Marclay, solo at The Louvre, and Steve recently performed "Indeterminacy" by John Cage with comedian Stewart Lee and pianist Tania Chen. Angharad Davies is a violinist active in contemporary, improvised and experimental music, whose freelance projects include work with artists such as Tony Conrad, Kazuko Hohki, Jim Thirwell and Mark Wastell. Since 2002, she has been exploring and expanding sound production on the violin by extending the sounding possibilities of the instrument.

The Stargazer's Assistant is the solo project of artist and Guapo percussionist / founder David J. Smith. Initially born out of the need to incorporate a sound element into David's large-scale sculptural installation "The Other Side Of The Island", since 2007 The Stargazer's Assistant has evolved into a fully formed musical entity, producing a series of highly composed and labour-intensive CD recordings, and live improvisations which focus on eclectic and subtle percussion performances which exude warmth of emotion. David Smith will be joined by David Knight on electric guitar and effects. David and David also perform together in The Amal Gamal Ensemble.

Disinformation is an art project primarily known for pioneering work with electromagnetic induction effects produced by the sun, lightning, the National Grid, and (as currently exhibited at Usurp Gallery) photographic flash equipment etc. Disinformation partly evolved out of its author's involvement (as a ground observer) in the Istochnik-Ariel laser antenna experiment on space station MIR. Since then Disinformation has exhibited in a nuclear bunker, bank vault, trawler and railway tunnel, at The Hayward Gallery (alongside Christian Marclay and Brian Eno), at Palais de Tokyo (Paris) and (for the MTV Awards) in Barcelona's Olympic Stadium, had 12 solo exhibitions, and collaborated with musicians such as Jim O'Rourke (from Sonic Youth) and saxophonist Evan Parker.

Following a year's hiatus in 2010 Guapo are currently resuming work on a new album for Cuneiform Records.

It is with regret we announce our split with keyboardist Daniel O Sullivan but are happy to announce his replacement as Emmett Elvin.
Both David J Smith and Kavus Torabi have played previously in Chrome Hoof with Elvin who also plays keyboards in Kavus Torabi's psychedelic band Knifeworld.
Guapo wish Daniel O Sullivan all the best with the many projects he is involved with.

The new album will see a return to the 'long form' composition of Five Suns and Black Oni while covering much ground previously unexplored by the group.

David J Smith has been editing and mixing the footage and audio from the performance of Five Suns at NearFest 2006 with artist & filmaker Tai Shani and engineer Antti Uusimaki. A memorable day in many respects, not least for the fact that the band were rushed through the night in two taxi cabs from Phillidelphia after our van broke down, leaving barely enough time to down a coffee before gracing the stage that afternoon. The results will be available as a bonus DVD with the new album on Cuneiform in 2012

Guapo will be resuming live duties in the Autumn and are planning a number of dates in the UK and mainland Europe in October followed by a short USA tour in November including a performance at John Zorn's N.Y. venue The Stone as part of Cuneiform's festival there.

Dates will be forthcoming when confirmed.

Many thanks for your continued support.

Guapo at RIO via French TV 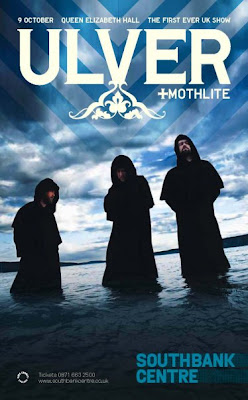 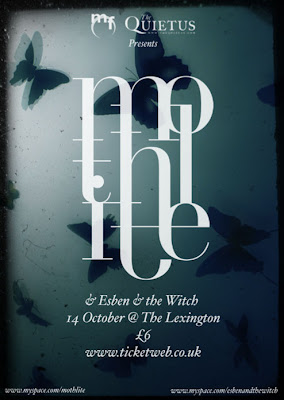 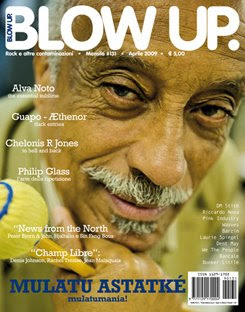 "During the Rock In Opposition Festival 2009, GUAPO (UK) will work with the GMEA from September 14th-17th on the sound spalization of their music. (GUAPO vs GMEA). Several performances will take place in the second hall of the "Maison de la Musique" on the 18th, 19th and 20th of September. A fantastic opportunity to discover the meeting of Rock and Sound Research."

Presented by Spike Island and hosted by Arnolfini...

A performance created by Tai Shani: A Minnie Mouse High Priestess conducts the ceremony, while above looms the spectre of notorious Satanist Anton LaVey, re-enacting his famous 1964 Jaybird Magazine poses. With the participation of The Forever Travelling Salesmen, Walking, Talking, Living Sex Dolls and The Messenger Majorettes.

From the dead the 12 shall rise, strangely animate but dead already and dead again, more than ever before, Daughters Isotope: THEY ARE DEAD, WE ARE NOT, WE ARE YOURS.
Posted by David J. Smith at 2:34 pm